Weekly update - Please ma'am, can we have our gold back?

This week’s weekly, looking at a bit of gold, politics and economics, comes from Robin Newbould. He is, wearing spectacles, the managing director of BullionRock and, clad in a Roman helmet, the head of execution and advisory for Ravenscroft. 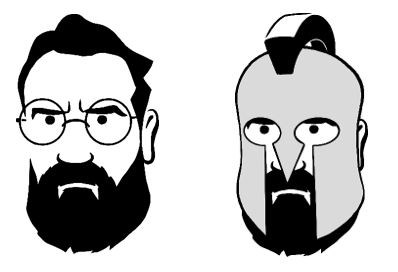 We are just putting the (much needed, to be honest) finishing touches to a new website for BullionRock, which is the trading name of Ravenscroft Precious Metals Limited. One of the pages talks about the collection of client assets and confirms that, subject to two working days’ notice, owners are free turn up to our offices, with the requisite sized holdall, prove that they really are who they say they are, sign a couple of bits of paperwork and leave, minding how they go.

Since starting the business in 2012, it is only the current misery of COVID-19, a full monty Force Majeure if ever there was one, that has prevented us from keeping this promise.

I only mention it this week because a high-profile client of a well-known gold custodian, that operates not a million miles away from here, is commencing legal action because it cannot get its hands on its gold or the economic benefit thereof. The custodian in question, on its website, proclaims:

“We provide safe custody for the United Kingdom’s gold reserves, and for other central banks. This supports financial stability by providing central banks with access to the liquidity of the London gold market.”
Source: https://www.bankofengland.co.uk/gold

So why, then, is The Bank of England (“BoE”) not allowing its client, the central bank of Venezuela, to sell gold worth USD1billion and remit the proceeds to the United Nations Development Programme for healthcare equipment, medicines and basic foodstuffs that are much needed in the South American country?

The UN said in a statement Wednesday, "Venezuela is in the midst of an economic meltdown and a dire humanitarian crisis that has prompted 5.1 million Venezuelans to go abroad — mostly to other Latin American and Caribbean countries — as refugees and migrants, as a power struggle between President Nicolás Maduro and opposition leader Juan Guaidó drags on."
Source: https://dppa.un.org/en/under-secretary-general-rosemary-dicarlo-calls-all-main-political-actors-venezuela-to-resume-serious

The BoE has declined to confirm what it will, or will not, be doing and does not want to comment. The law firm acting for Venezuela, which has filed a USD1billion lawsuit against the Bank of England over its inaction, does,

“There is no, or no sufficient, basis for such refusal,” the court documents say, “BoE's conduct is wrongful.”
Source: https://www.zaiwalla.co.uk/en/news/zaiwalla-co-llp-featured-in-relation-to-venezuela-filing-a-law-suit-against

The problem, it would appear, is political. You see, the current president of Venezuela is not universally liked. The British government, along with about 60 others worldwide, including the United States of America (“US”), does not recognise Mr Maduro as Venezuela’s legitimate leader, arguing that he rigged the last presidential election a couple of years ago. He tried, in late 2018, to get access to some the gold in London but was refused, leading to protests in the streets of Venezuela, with chants of,

“Bank of England, you’ve been told, Give Venezuela back its gold!”

{I presume they were chanting in English, unless the above rhymes in Spanish, as well?}

Neither collapsing oil prices nor the whiff of corruption have done much for Venezuelan fortunes and aggressive international trade sanctions have been levied against the country because of the latter. These sanctions extend to the prohibition of any US state or entity from dealing in gold from the country and a recommendation that allies of the US prevent the same. It is rumoured that Iran is the last available destination for Venezuelan gold after President Trump cracked down on deals being conducted with Russia, Turkey and the United Arab Emirates.

A shame, because, just look at the price rise in the local currency over the last 12 months, as shown below! 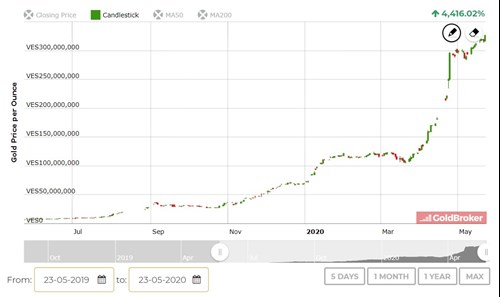 In reality, even this gain is of little consequence, when inflation is estimated to be running at some 15,000% per annum (according to the International Monetary Fund (“IMF”) https://www.imf.org/external/datamapper/PCPIPCH@WEO/WEOWORLD/VEN , but the real number could be significantly higher, and no official statistics are being produced by Venezuela - funnily enough!). Let us hope that this is not an example of how inflation can go horribly wrong as a result of money printing during periods of economic hardship as we have recently seen. As Bloomberg notes:

“The Venezuelan crisis, however, got worse as the oil price continued to fall, compounded by other factors that reduced Venezuelan oil output. International investors began looking elsewhere, driving the value of the currency even lower.

In these conditions, printing more money simply made the problem worse. It added to the supply of currency, pushing the value down even further. As prices rose, the government printed more money to pay its bills. This cycle is what causes hyperinflation.”
Source: https://theconversation.com/what-caused-hyperinflation-in-venezuela-a-rare-blend-of-public-ineptitude-and-private-enterprise-102483

Does anyone else worry that words similar to these might be written in the future about countries with a much bigger standing on the global economic stage than Venezuela? Or is it just me?

Enjoy, as applicable, the sunshine, the short working week and a step closer to a return to normality.

PS Thanks to a very talented old school friend, Angelo Tirotto, for the cartoon faces: he knew just what to provide for me to use to signal when I was writing about BullionRock, Ravenscroft, personal and/ or controversial subject matters (you’ll have to wait for another day to see the Joker version!)