Weekly update - Gold is on the menu at Berkshire Hathaway 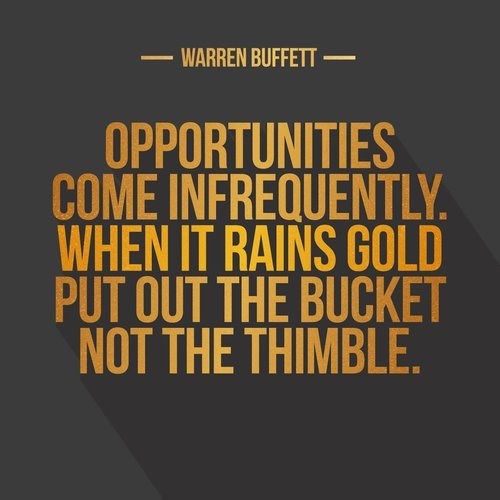 Almost all of the quotations that you can find from Warren Buffett (you know the guy……one of the most successful investors in the world and fourth wealthiest person on earth) on the topic of gold involve his dispensing a whole heap of reasons why not to buy the yellow metal. By way of examples:

“(Gold) gets dug out of the ground in Africa, or someplace. Then we melt it down, dig another hole, bury it again and pay people to stand around guarding it. It has no utility. Anyone watching from Mars would be scratching their head,” he said, whilst giving a speech at Havard in the 1990s.

“What motivates most gold purchasers is their belief that the ranks of the fearful will grow,” Buffett wrote in 2012. “During the past decade that belief has proved correct. Beyond that, the rising price has on its own generated additional buying enthusiasm, attracting purchasers who see the rise as validating an investment thesis. As ‘bandwagon’ investors join any party, they create their own truth -- for a while,” from the Berkshire Hathaway newsletter.

Which made the news that in the second quarter of 2020 Mr Buffett’s multinational conglomerate Berkshire Hathaway had added mining company Barrick Gold to its portfolio all the more interesting. According to a regulatory filing published yesterday, as at 30 June 2020, Berkshire held a new position of 20.9 million shares in Barrick, or 1.2% of the company, with a market value of $565 million as at the close of business on Friday. Just so you know, the report also showed other moves made by Buffet which included the outright sale of the Goldman Sachs holding and all airline stocks.

I can only surmise that Buffett must be thinking that, as Bloomberg eloquently puts it:

“Now, gold miners are benefiting from surging bullion prices that are boosting profit margins as costs of production have steadied, making them increasingly attractive investments.”

Silver rally 2020: Out of the ordinary or reversion to the norm?

Whilst noting that past performance is no reliable indicator of future returns, we opine that silver tends to have a duplicity to its performance profile: on the one hand it reacts to the fortunes of the industrial companies that use it; and, on the other, it acts as a precious metal safe harbour. We also reckon that silver tends to perform as though it were attached to gold by an elastic band; that is to say that its price usually moves later, and with greater volatility.

So this year, silver has had a pretty decent bounce, or a 'boing back' if you will (up 49% year-to-date). The difference in the respective prices of gold and silver (known unimaginatively as the Gold/Silver ratio) hit an unusual high of 120 during the outset of the COVID-19 outbreak, when panic began to rule the world. As it happens, both metals initially declined in price during the early days of the pandemic, something that has occurred during previous crises, when investors, to be frank, are guilty of throwing out precious metal babies with the conventional investment bathwater. 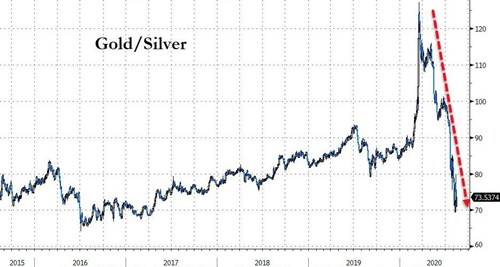 The number of silver ounces that one ounce of gold can buy using LBMA$ closing prices. (Bloomberg)

Investors had been giving silver a really wide berth for the last five years or more, but the historic (20 year) average ratio of 65.55 times had become more and more anomalous to the point where action had to be taken! At the time the ration hit 100x, we noted that as gold started had rising, it seemed unlikely that the disparity would last, particularly when it is true to say that silver has frequently (and quite handsomely) outpaces the yellow metal during bull runs and the supply of refined investment grade silver has been hampered by difficulties with manufacture and logistics this year.

So what happens next?

With interest rates low, bond yields low or negative, and fiat currencies still being printed into relative weakness, these precious metals, that cannot be pulled from thin air, may continue to shine.

To sum up, I was pleased to see the below included in the most recent outlook from Kevin Boscher, Ravenscroft’s chief investment officer:

“Gold also offers the potential to be a major winning theme over the next few years. In previous pieces, I have previously made a strong case for why we believe that gold is in a long-term bull market. The long list of supportive factors include negative real bond and cash yields, a weakening dollar, surplus dollar liquidity, competitive currency devaluations as all major countries “go for growth”, the risk of currency debasements as central banks fund increasing government deficits and the threat of a new cycle of rising inflation. Gold is always regarded as a safe haven asset and tends to thrive on economic turbulence, policy uncertainty and rising economic and political volatility, which aptly describes the current environment. Gold mining companies would also be expected to perform very strongly in this scenario and, indeed, have been enjoying strong gains over recent weeks.”