Weekly update - Are US bond yields the pebble in the pond?

This week’s weekly is provided by Robin Newbould, Group Head of Execution, Advisory and Precious Metals.

Often, when I’m in a discussion, about anything, with anyone, I can get to a point when I’m trying to make my point and will say, “I can’t think of the right cliché, but am sure there is one,” before trying desperately not to show my general ignorance by using the wrong phrase or saying that is actually on the tip of my tongue at the time. Take this week’s title referencing “the pebble in the pond,” for example. I have more than a nagging doubt that that it could or should have been “the flap of the butterfly’s wings,” or “the canary in the coal mine” or “a study in Newton’s third law of action and reaction” but never mind, let’s move on.

Foremost in the financial news this week has been inflation and bonds. We have seen fluctuations in the prices of mighty US Treasuries, bonds issued by the American government, which have, for all of the time that I have been interested in investments, been regarded as one of the cornerstones to understanding and pricing risk and reward. Rated AAA (apart from with S&P, who downgraded the assets in 2011 to AA+) and issued and traded in dollars, US Treasuries have long been considered as the ‘risk free’ investment without equal: having never failed to pay a coupon or a redemption amount (this is true of others, such as UK Gilts, but hey.) US Treasuries are used as a benchmark for comparing both other bonds (such as those issued by corporates or even other nations) but also for comparing (and setting) the returns of other assets, in relation to total return, income or yield. So when these benchmark bonds, often cited by the number of years to go until maturity (ie the two year, the seven year and the 10 year), move, or move suddenly, it is pretty big news.

Longer-dated bonds tend to be the most volatile (there is more chance of relevant things like interest rates changing the longer there is to go until you get your money back and also longer for you to live with those changes) and, as below, we can see that, in the case of the 30-year US Treasury, bonds have lost more than 16% of their value this year alone. Maybe these things are not so risk free after all? 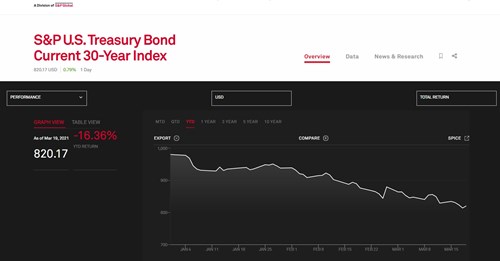 So what’s been happening to make this happen? Well, at this point, and hopefully without patronising any of the readership, perhaps a little bit of bond and economic logic might be the order of the day:

For lines one and two, I could have added ‘expectation of’ and for line four, ‘usually’ … as nothing is certain here except for line three, which is basic math: fixed coupon bond income, when paid for at a lower price, will bring greater yield. Line four has started to come about as the US dollar has been stronger this week, causing the gold price, which tends to behave inversely to both the US dollar and to bond yields, to stutter, by the way.

In 2021, we should acknowledge that the ‘interest rate rising’ part of the equation in the US has, as recently as this week when Fed chairman Powell spoke, been reckoned to be on hold for at least another two or three years.

“With inflation running persistently below [the Fed’s] longer run goal, the Committee will aim to achieve inflation moderately above two percent for some time so that inflation averages two percent over time and longer-term inflation expectations remain well anchored at two percent. The committee expects to maintain an accommodative stance of monetary policy until these outcomes are achieved.” https://www.cnbc.com/2020/09/16/watch-fed-meeting-live-updates.html

I have previously opined that I am sure that the US would love to see some inflation kick in: the joy of it being its ability to make current debt less expensive to pay off in the future (and, as we should all know, the current debt pile of the US is nothing short of terrifying, to most rational minds.) Whilst Covid-19 vaccines and fiscal stimulus (check out President Biden's $1.9 trillion relief package!) have raised expectations that the economy will bounce back and get inflation going, I am with IMF chief economist Gita Gopinath in thinking any such “one-time” bump in prices will not fundamentally change inflation going forward.

Perhaps the move in the 30-year US Treasury (and therefore most other long-dated bonds) is more simple to explain. For some time, I have considered it very difficult to get my head round the concept of accepting an overall yield of less than 2% per annum for a 30-year US Treasury: the reward for the risk being far too low. Other investors obviously agree and the market appears to be turning, but there may be further to go if historic norm is anything to go by: 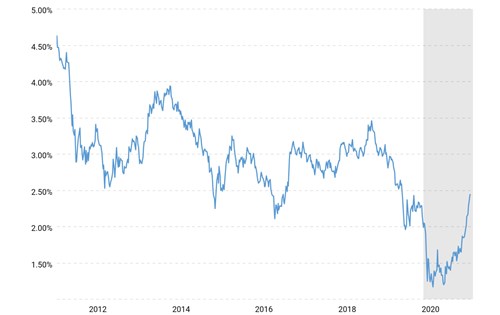 In summary, and for now, those lower-for-longer interest rates, a (painted) rosier economic outlook and continued improving risk appetite are encouraging investors to buy riskier assets such as equities, rather than bonds. The Dow Jones and S&P500 indices hit record highs last week, whilst some of the fancifully-valued tech stocks in the Nasdaq actually fell (at long last) … I will let one of my colleagues spend another day looking at growth to value rotation and the effects of both inflation expectation and rising bond yields thereon.