Future of cricket in Isle of Man given boost by Ravenscroft

The Isle of Man's youth cricket programme has been given a significant boost from Ravenscroft.

The financial services company, which opened an office in the island last summer, has agreed a partnership with the Isle of Man Cricket Association for its CricStart programme. The agreement covers CricKids for youngsters aged 3 – 6, CricSoft for those between six and 10, CricFit for 14+, the batting and bowling clinics as well as women’s and girls’ cricket.

‘The overall aim of CricStart is to encourage new players of any age or gender to learn and develop their cricket skills through sessions organised in school, club and community environments. It is a programme that has been designed for the Isle of Man and the response has exceeded expectations,’ said IOMCA development officer Greig Wright.

'The support from Ravenscroft is incredible as it allows us to offer more sessions and develop our plans so that as many young people as possible can enjoy the sport, learn new skills and enjoy the camaraderie of a team sport. It’s fantastic that a company which has only been here a few months is already making significant contributions to the local community and we are delighted to be Ravenscroft’s first sporting partnership.’

Ravenscroft, which also has offices in Jersey and the UK, is headquartered in Guernsey where it has been a long-term supporter of cricket and currently sponsors of the Ravenscroft Future Stars programme, which introduces the skills of cricket to girls and boys, aged from five to eight, through various fun-based drills.

‘A core part of the Ravenscroft ethos is to give back to the communities within which it operates. It has a considerable CSR programme in Guernsey and Jersey and we are delighted to be able to start replicating this in the Isle of Man,’ said David Bushe, director of Ravenscroft in the Isle of Man.

‘Last year, we sponsored Santa’s Little Helpers and supported the Chamber of Commerce and have already committed to both again this year. We are in negotiations for a number of other sponsorships and are delighted that we are able to support Isle of Man Cricket Association as they get ready for another busy season.’ 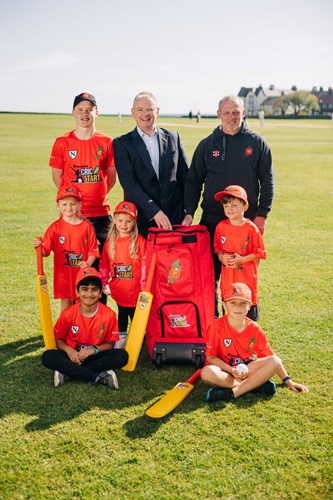 All six of the island’s cricket clubs with junior sections will be running the CricStart programme during the summer. Youngsters who sign up will be given CricStart branded kit comprising of a t-shirt, cap, water bottle, rucksack, bat and ball. Details of how to enrol will be available as soon as restrictions have been lifted.

‘There is a real focus on engaging with youngsters from a very early age and our hope is that they develop a real passion for the sport and continue through the ranks at a club level and can then represent the Isle of Man. Everyone is really enthusiastic and keen to get going,’ said Mr Wright.

Anyone interested in signing up for any of the CricStart should email iomcricket@hotmail.com