Weekly update – Election Day, the US midterms and what it means for investors

This week’s update is written by Tom Yarwood, who is in our discretionary investment team in Guernsey.

In short, the midterm elections decide the makeup of Congress; a very-powerful constitutional body that’s made up of two parts: the House of Representatives and the Senate. The House effectively works for the local population whilst the Senators are there to represent the interests of the state, combined, they hold all the legislative power in the US and are therefore the only part of the government that can make new laws or change existing ones. For bills to become law, they must pass through both houses so determining which party holds the majority in Congress is of great importance - the President’s ability to achieve their given agenda is largely dependent on whether their party controls Congress or not, so the results are crucial. 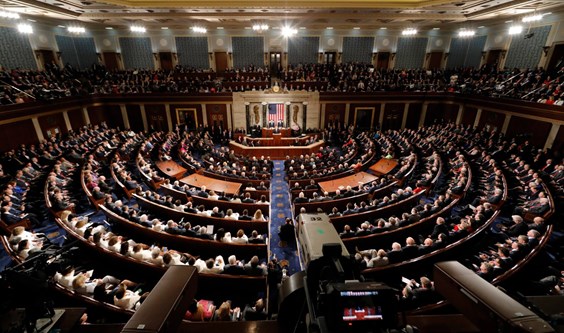 For the last two years, the Democrats have controlled both chambers of Congress as well as the White House, allowing them to set the policy agenda and pass legislation like the Inflation Reduction Act, or the Infrastructure Investment and Jobs Act. The downside of this control has meant that the Democrats have taken much of the blame for the economy’s woes, with inflation being one of voter’s biggest bugbears and President Biden suffering poor approval ratings. As a result, the Republicans were ahead in the polls and a ‘Red wave’ was priced in by financial markets for the Republicans to take Congress. However, at the time of writing, the Republican victory that was expected has failed to materialise and the outcome so far suggests a more mixed result; with the Democrats defying political forecasts to keep control of the Senate. Whilst the Republican Party, also referred to as the Grand Old Party (GOP), continue to be the favourites for control of the House of Representatives, this is by a much smaller margin than previously forecast and Democratic control of the Senate means it’s imperative for the Republicans to be successful. If the Democrats do manage to hang on and retain control of both Chambers, then it’ll be business as usual, and the Biden administration will be able to continue pushing through key legislation that a Republican-controlled House of Representatives would otherwise look to block. On the other hand, if the Republicans are successful in taking control of the House, then it’ll result in a split government under Biden’s presidency and the party will be dogmatic in hampering any Democrat legislation put forward, meaning that political gridlock will ensue. Even when Biden had a Democratic majority in Congress, the party still faced difficulties passing through legislation, it’ll be near impossible for his administration to do so without one. Therefore, the most important outcome to be observed from this election is whether it’ll result in continued Democratic control or in a divided government. If the Republicans do take the House of Representatives, a divided government will result. In this potential scenario (unless there’s a national emergency), it’s very unlikely that any major legislation will pass during the next two years until the following presidential election.

However, a divided result isn’t necessarily bad news for investors. A gridlocked Congress will make it more difficult for either party to advance their own agenda and this decreases the risk of any major political intervention or macro-impacted outcomes (i.e limiting the prospect of any major tax changes, spending policy etc.). This may create a more stable environment for markets over the next two years and, historically, as a result, equities have tended to outperform after the midterm results. In 17 of the 19 midterms since 1946, the stock market performed better in the six months following an election that it did in the six months prior. 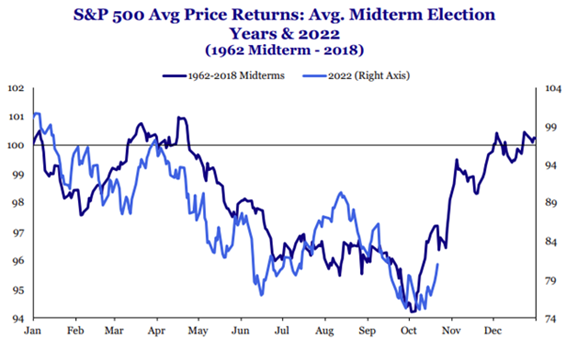 The flipside of this is there is still potential for policy repercussions next year under a divided government to have a significant macroeconomic impact. For example, the need to raise the debt limit in 2023 could potentially lead to further fiscal tightening in 2024; a divided government could make a fiscal response to a potential recession less likely to pass or much more muted. A surprise Democratic win in Congress could really weigh on equities as the market would expect additional corporate tax increases to come through, negatively impacting company earnings.

To conclude, whilst we believe it’s important to be both aware and informed of what’s happening in Washington, long-term investors shouldn’t be losing too much sleep over what each possible election result could mean for their portfolios. At Ravenscroft, we’re long-term thematic investors; investing into tangible themes that benefit from irrefutable trends, like changing demographics or technological advancements, which are already in motion and shaping our world. This means that we don’t try (or need to) predict the future and second guess political outcomes like the midterms to drive our portfolio returns. So investors here should continue to rest easy despite any breaking news in the US midterms.