This week's update comes from Will Peatfield who is in our advisory investment team in Guernsey.

"Little darlin', I feel that ice is slowly melting" The Beatles

As we venture into the new year, inflation remains our favourite (or least favourite) buzzword, with much interest and debate amongst market analysts, journalists and here at Ravenscroft. While recent data suggests a disinflationary trend, we must remember that it is still early days. The Federal Reserve, the Bank of England, and the European Central Bank are wise to proceed with a degree of caution over the coming months.

Last year, soaring inflation was tackled by central banks with a series of interest rate hikes, along with higher borrowing costs that exacerbated the squeeze on real incomes. But as we move into the new year, signs of inflation easing have started to emerge, with investors' expectations of where inflation will be in five years no longer increasing.

Just as a recap, we’ll look back at the main drivers of inflation over 2022. The rise in energy prices was a major contributor, with the pressure intensifying even before Russia invaded Ukraine. However, energy costs are forecast to come down in 2023. Another point of concern was asset prices, particularly for houses, which soared during the pandemic, but higher mortgage rates are already leading to a slowdown in house price growth in many countries.

Global stock markets rose last Tuesday after US consumer price figures showed inflation pressure continuing to ease in November, further strengthening the Federal Reserve's argument for a smaller interest rate hike when it meets at the end of this month. This positive outlook was echoed in Asian markets as well.

The Eurozone experienced a lacklustre performance last year; however, the current year has begun on a strong footing. One of the primary factors contributing to this positive trend is the revision of inflation and recession predictions. For example, Goldman Sachs recently announced that it no longer anticipates a recession in the Eurozone and has revised its growth forecast from a negative 0.1% to a positive 0.6%.

CPI comparison data - UK, France, Germany, Italy and the US 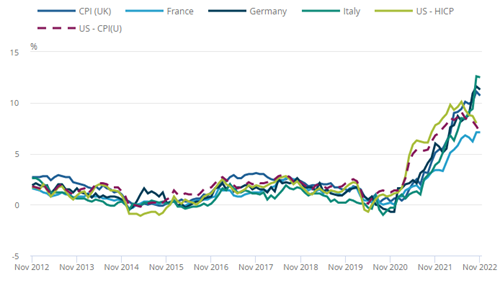 Whilst the inflation data is encouraging from a market perspective, as we all well know, the stock market is a dynamic and ever-changing entity, swayed by a multitude of macroeconomic factors which are difficult to predict. The majority of market analysts have taken into account the inflation consensus in their predictions, however, there is one wild card that remains difficult to factor in: the ongoing conflict in Ukraine. Whilst we all hope for a swift and peaceful resolution, it appears that Putin has other plans, with media reports suggesting he is going to mount a new offensive in the spring.

More positively, it appears that core goods inflation has come to a halt, with prices beginning to decline. This can be attributed to a variety of factors such as falling car prices, overstocked retailer inventories, and the return to normalcy in supply chains, most notably due to the u-turn from President Xi on China’s Covid-Zero policy. On the other hand, core services inflation is still quite elevated. The exact extent of this inflationary pressure is somewhat dependent on which data sets we focus on. However, it is worth noting that housing inflation is expected to decrease in the near future, which may help to alleviate this issue. Additionally, it's worth considering the volatility of certain components such as airfares or health insurance prices.

Crucially, this early data suggests that inflation has peaked, with each of the last three Consumer Price Index reports making a false dawn look less and less likely. Shelter, the most influential inflation category, is expected to cool later this year, with private indices of new leases showing rent growth has peaked in the first half of 2022.

The jury is still very much out on the “stickiness” of inflation. Duncan MacInnes from investment management company Ruffer has come out just this morning and told Citywire Wealth Manager that inflation will likely remain sticky for the foreseeable, predicting a decade of volatile inflation and citing IMF data, stating that once inflation goes above 5%, it takes on average a decade to get down to 2%.
Households still expect inflation to remain high for another year or so, but three-year ahead expected inflation is in line with historical averages. Core goods inflation is over, with prices expected to keep falling over the year.

Inflation will undoubtedly remain a hot topic throughout 2023, and one which we are keeping a very close eye on. The early signs are that the rate has peaked, but it is important to remain cognisant of external factors, which could potentially impede the return to the inflationary levels we have been used to for the last decade.