Weekly update - Silver steps out of the shadows

This week’s update is written by Matt Girard, in our precious metals team.

It's been a bit of a torrid time for precious metals over the last few months with the gold price ending the month at $1671 per troy ounce and silver at $19. Given the current global financial situation with rising inflation and ongoing geopolitical tension, history would suggest that metals should be finding some serious momentum. However, the aggressive monetary policy being pushed by the Federal Reserve coupled with a surging US dollar are creating a significant headwind for metals.

Global markets are becoming increasingly vulnerable, and the risks of recession are rising. Central banks are having to perform a difficult balancing act to avoid worst-case scenarios. Although, we’d likely all agree that steering clear of a recession is the best outcome, being prepared for one (should it happen) is not a terrible idea either. The market commentary released earlier this year by the World Gold Council shows some positive signs for gold in previous periods of recession1. 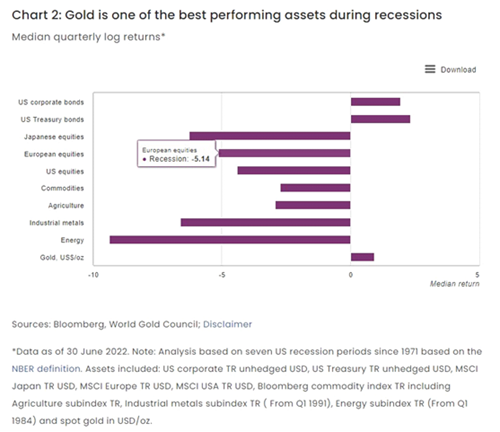 The silver market is starting to show some interesting signs as USD spot has moved up 7% on the day to $20.40 per ounce. This could be due to weak manufacturing activity being reported in the US as PMI figures are 1.9 percentage points lower than August2. The gold/silver ratio is often seen as an indicator of one of the metals being over or undervalued. The ratio shows the number of ounces of silver it would take to equal an ounce of gold. To give an example, the current ratio is 82. So, as it stands, the value of 82 ounces of silver is equivalent to a single ounce of gold. Over the last 20 years, the average has been around 55-60 but over the course of the last two years it’s been nearer 75.

Silver often seems overshadowed by gold in terms of notoriety and investor trading but according to new research by Oxford Economics, investors may want to take a closer look into asset allocation within their portfolios. The findings suggest that an average of 4-6% silver allocation would benefit most institutional and individual investors3. It also concludes that silver should be seen as a distinct asset class as its return characteristics are sufficiently different to gold.

Be sure to check our website later this month for our Precious Metals edition of the Ravenscroft podcast. We discuss a few of the most common misconceptions we come across and (hopefully!) provide some insight into pricing, uses and market standards.