Guarantee a loss on every Swiss and most Swedish, German, Finnish and Dutch government debt investment bought today and held to any maturity between three months and 20 years? Mind if I don't? Even the French have managed to get in on the act of having their investors pay for the privilege of holding their debt. On Thursday, for the first time in history, a EUR5billion 10-year French sovereign bond issue was launched at a negative yield.

These are unusual times indeed. In my day, we used to call this asset class "fixed income" but I’m not sure we can anymore!

Back to sovereign debt and perhaps more alarmingly, it is rumoured that the Austrian government is considering another 100-year bond issue and I, for one, can't blame them.

Their Euro-denominated September 2017 "Century" bond sale, for an investment maturing in 2117, was taken at a 2.1% yield, for 100 years, but now only returns new investors 1.2% pa for the next 98 ... that is to say, the price in the market for these bonds has gone up, and not insignificantly. Sounds to me like a whole load of pension funds setting up some rather unlucky Europeans for a pretty miserable retirement! At least it's a positive return I suppose: as we learnt this last week that the amount of global debt that has a negative yield has risen to more than USD13trillion, as shown by the blue line below. 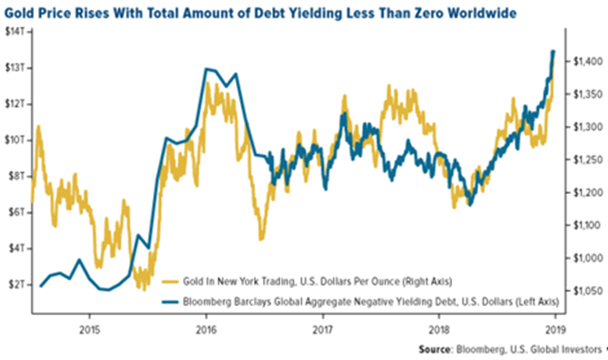 Oh look! I managed to squeeze the gold price in to this week's piece. Gold has been having a decent run of late (Friday excluded, when some US jobless numbers surprised on the upside and slightly dampened expectations of an imminent US rate cut.) At BullionRock, we maintain that the main drivers of the gold price are: global economics, geopolitics, the US dollar, inflation, interest rates and central bank activity.

Without wishing to keep you from your Monday for too much longer, most of these boxes have been getting ticked for a while now: economic downturn fears, a unpredictable US president (damn it, he got a mention), an expected-by-most weakening dollar and low interest rates have all been on hand to help the gold price ... and, wouldn't you know it, the central banks of most countries, the biggest players in the gold market, could see it coming: 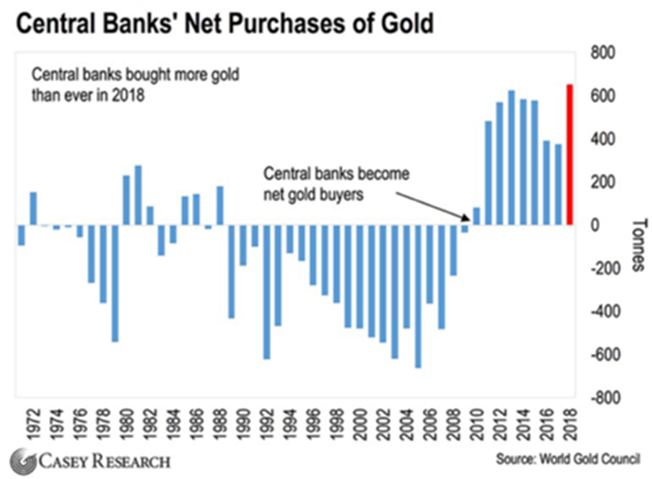 One final point for you. The Bank for International Settlements (BIS), whose membership consists of 60 central banks from the world’s largest economies, facilitates transactions – notably gold transactions – between those central banks. The BIS also issues Basel Accords, a set of recommendations for regulations that set the standards for the global banking industry. On April 1 this year, Basel III went into effect and, in the latest rules, was something of significance for gold, namely:

(i) cash owned and held at the bank or in transit; and

(ii) gold bullion held at the bank or held in another bank on an allocated basis, to the extent the gold bullion assets are backed by gold bullion liabilities.

What this means, in plain English, is that gold’s role in the international monetary system has been upgraded for the first time since the 1970s when the gold standard was abandoned. Interesting, right?

Have a great week everyone!